About one in five couples today are involuntarily childless, and the need for professional medical support is increasing. When looking for a suitable IVF center, the Internet provides numerous possibilities to gain detailed information beforehand on the varied choices offered by the IVF center in question, including the treatment procedure, the specialists responsible for the realization of the therapy etc. However, for many people concerned, it is even more important to know what the performance figures of a clinic look like (e.g. pregnancy rate, birth rate):

Number of women who got pregnant after an IVF attempt (therapy cycle) (all age groups, transfer of top blastocysts): 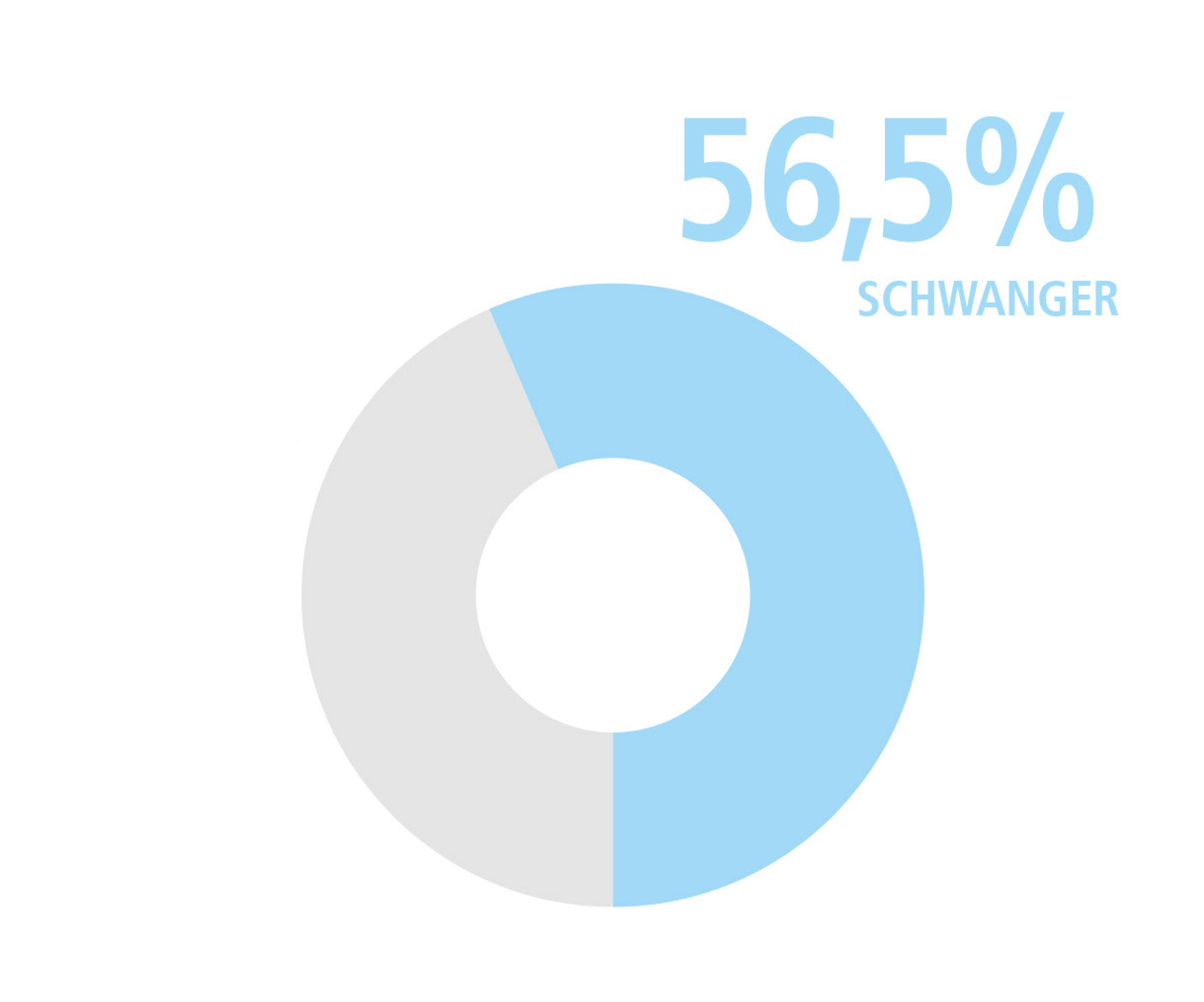 Number of women who got pregnant after an IVF attempt (therapy cycle) (up to 37 years of age, all transfers)

In some countries, IVF clinics are required by law to publish their results. In countries where there is no such legal obligation, the provision of these data takes place on a voluntary basis. We are continually faced with cases, where partly pregnancy rates of over 90% are reported which are often even accompanied by a message stating that the pregnancy rate allows an informed assessment of the likelihood of successful fertility treatment. Hence, we at our IVF centers clearly dissociate ourselves from such promises. There is no such thing as the "one and only" success parameter.

Topic series on our

In light of past experience, this is a question in which many couples are interested when looking at the outcomes presented. In order to be able to give a useful answer to that question, it is important, firstly, to understand that the underlying reason for infertility mostly consists of a combination of factors, such as diseases, genetic disorders, age-related factors, unhealthy lifestyle habits, harmful environmental influences. The chances of a successful treatment outcome are based primarily on the personal situation of the patients. With regard to the treatment results published by an IVF center, it is to be noted that such results do not apply to all affected women/men equally (e.g. indication of age group and pregnancy rate) and should therefore be viewed on a differentiated basis. The following is a case example.

A pregnancy can be confirmed by biochemical tests (detection of the pregnancy hormone human chorionic gonadotropin (hCG) in the blood) or by visual examination (using ultrasound technology, e.g. presence of fetal heartbeat). The "visual confirmation" of a pregnancy is referred to as clinical pregnancy (rate). This is, of course, what we desire, but unfortunately not all positive pregnancy tests will lead to a vital pregnancy resulting in the birth of a child (live birth rate). Therefore, the clinical pregnancy rate is always considered to be the more reliable parameter. 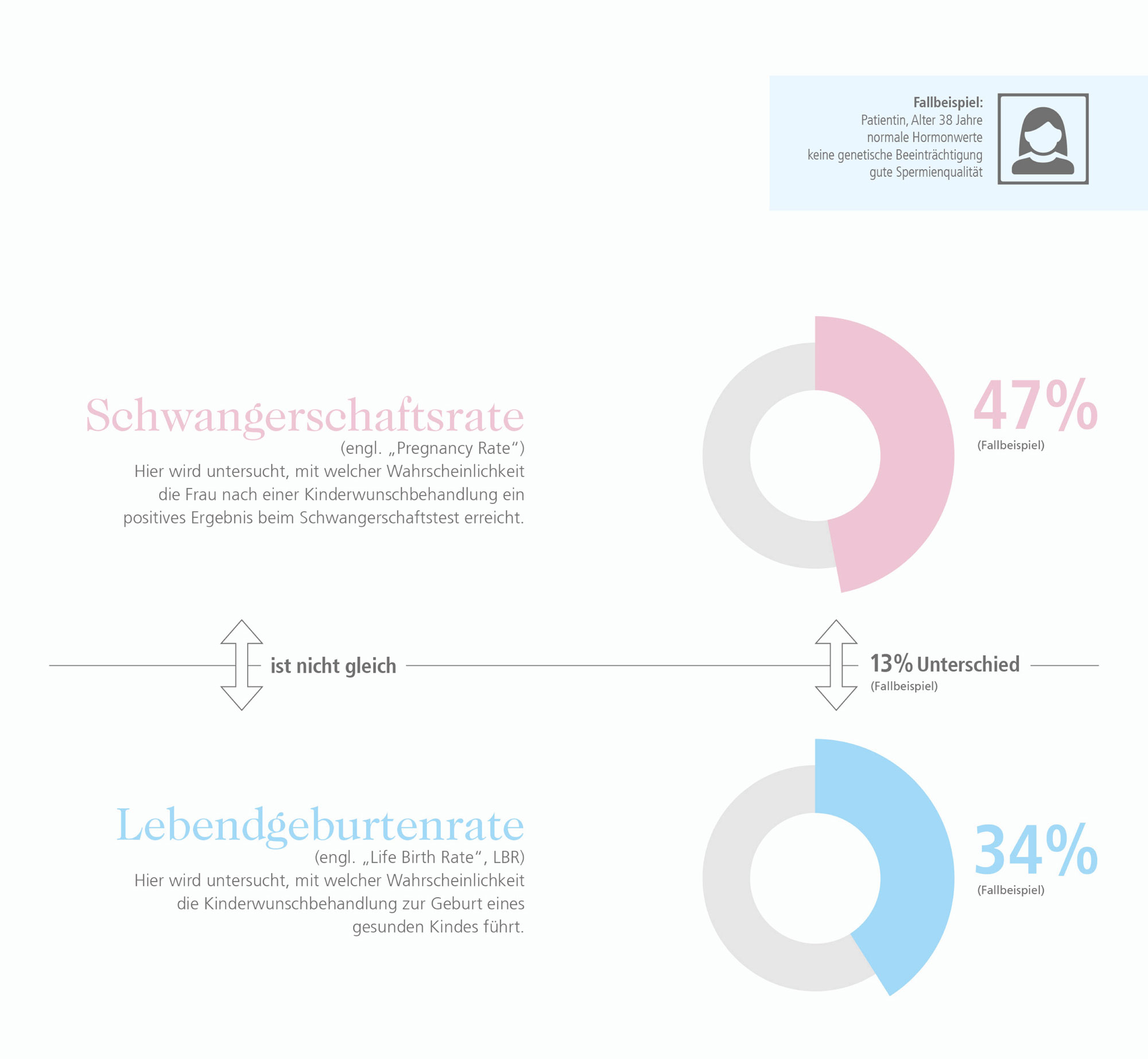 Depending on the course of pregnancy, the live birth rate may differ from the initially stated pregnancy rate. │ © 2019 IVF Zentren Prof. Zech • Member of NEXTCLINICS

The term "cumulative" derives from the Latin word "cumulare" (to accumulate). The cumulative pregnancy rates are calculated by taking into account the number of pregnancies achieved in the context of medically assisted reproduction after several consecutive embryo transfers ("fresh" and "frozen" cycles) and indicates that the likelihood of becoming pregnant increases with the number of IVF attempts the patient has already undergone. 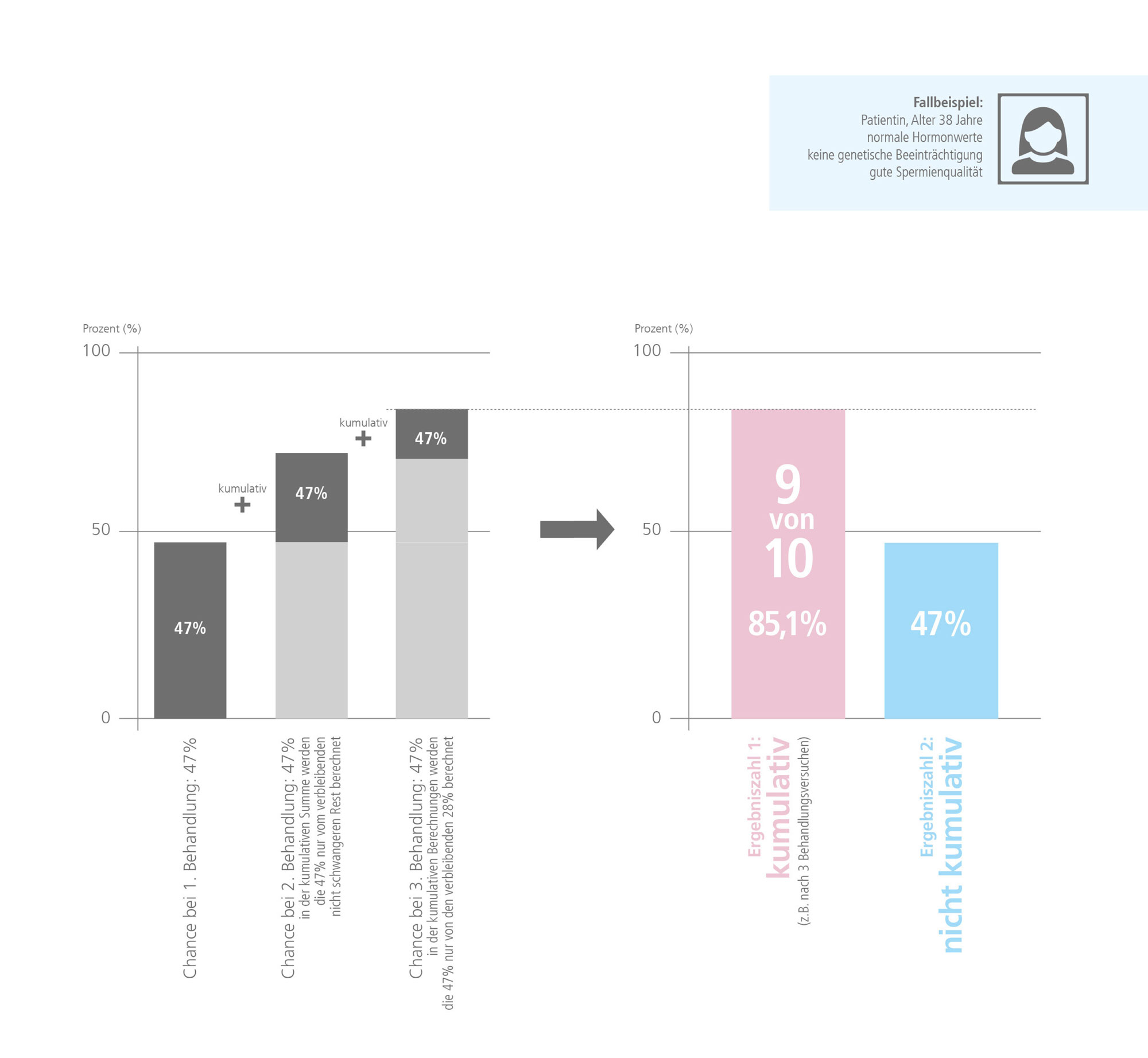 Although the chances of success per attempted treatment (therapy cycle) remain the same (e.g. 47%), the prospect of success calculated on a cumulative basis increases with each additional attempt. Depending on the method of calculation, there might be considerable differences between cumulative and non-cumulative results. │ © 2019 IVF Zentren Prof. Zech • Member of NEXTCLINICS

The cumulative pregnancy rate can be calculated in different ways, but it is difficult to be quantified and may give rise to false estimations. For example, there is no consensus on the number of attempts that shall be taken into account for the cumulative calculation. Each fertility treatment is to be seen as an "independent event", i.e. the outcome (whether positive or negative) of a previous therapy does not have any impact on a possible further treatment. It's like rolling the dice. The probability of rolling a six is 1:6. If after 5 tries a 6 has not been rolled, the sixth try offers exactly the same odds as the previous attempts, that is to say 1:6.

Topic series on our

Using customized therapies to increase the probability of pregnancy

However, there is no guarantee that the fertility treatment will be successful. However, thanks to intensive research in the field of reproductive medicine and the development of new procedures, the prospects of success are notably higher today than just a decade ago. As a fundamental rule, evaluating the chances of fertility treatment success always requires a customized approach, i.e. taking into account the couple's medical and personal circumstances. This is even more important in view of the fact that the chances of becoming pregnant might be influenced by a variety of factors. The following list shows a choice of aspects that are decisive for us when it comes to a realistic assessment of each individual couple's chances of getting pregnant:

Against this background, our medical approach is based on therapies that are tailored to the individual needs of the patients, including detailed analyses and mechanisms of selection carried out by a team of specialized physicians, biologists, and geneticists (Learn more).

In order to help you realize your dream of having a child, the following aspects are of utmost importance to us. The focus rests on the couple´s individual medical situation combined with the means at our disposal and our professional performance.

Our motto means intimate love and happiness for couples who wish to have a child. For these couples, a child is living proof of the perfection of their relationship.

Stay informed
as a partner
in our network.

For personal questions we look forward to your message: