Vitrification is the phase transition from liquid to a glass-like solid. This prevents the formation of ice crystals which can cause great damage to the cells. Aseptic vitrification is based on a closed and aseptic system, allowing for the freezing of human cells and tissue in cryopreservation medium inside a protective cryo straw at a temperature of - 196 °C. The straw is then placed in a nitrogen tank for storage. Aseptic vitrification is a scientifically proven procedure and its efficient and above all safe application is an integral part of the daily work at our IVF centers – an aspect that is crucial, for instance, with respect to cryo-cycles in fertility treatment or female fertility preservation (for example, due to an upcoming cancer treatment by chemotherapy). 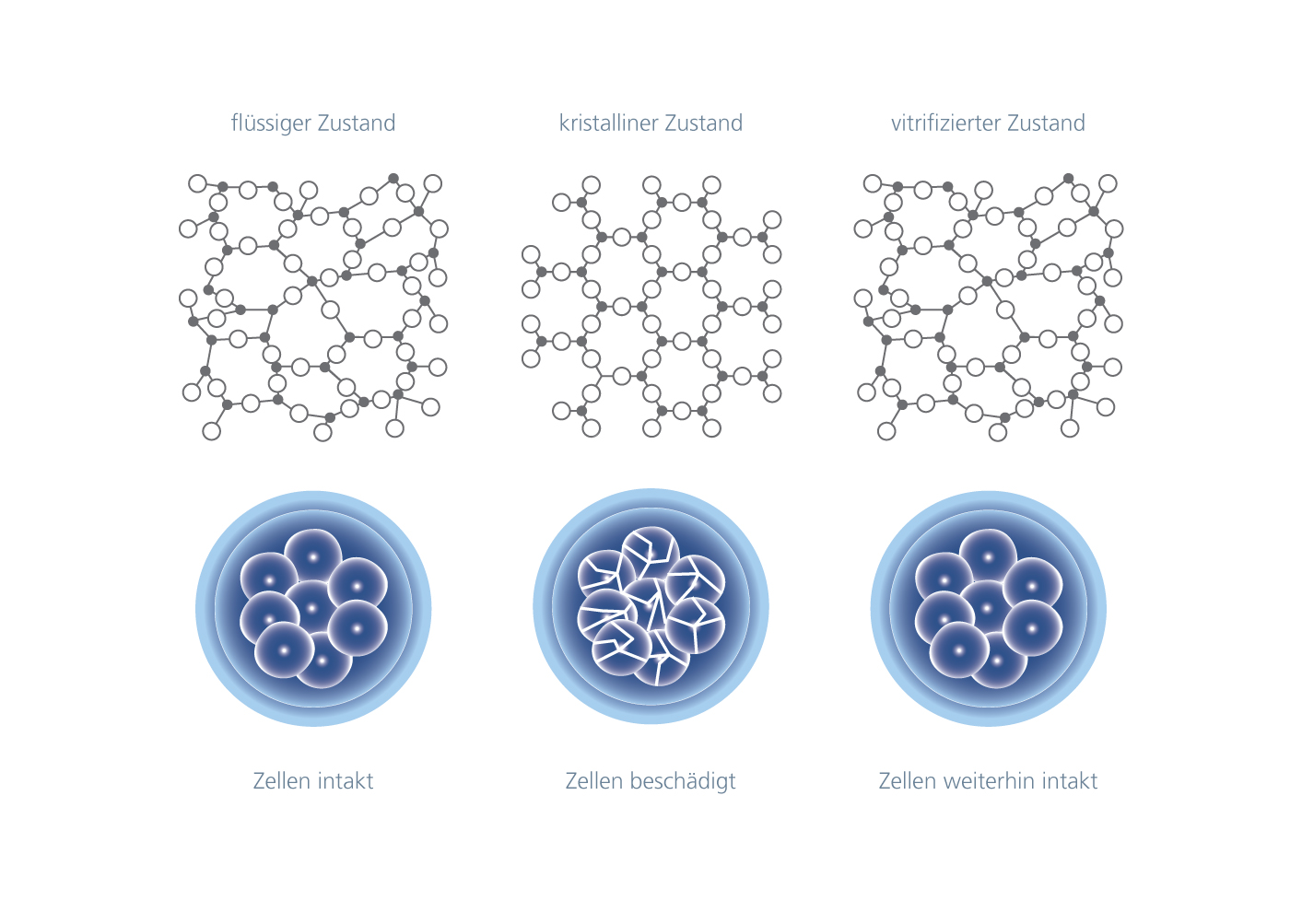 Leading international biologists, such as Dr. Pierre Vanderzwalmen (co-worker of the Zech Centers), have developped and successfully applied the technique of vitrification. Already in 1979, Dr. Vanderzwalmen conducted the first studies based on aminmal trials and later he set milestones in the field of cryopreservation (see right column). For Vanderzwalmen, the goal was to develop, together with his colleagues, a method offering advantages in practical everyday application (e.g. in terms of swiftness: vitrification only takes a few seconds, "slow freezing" takes about 2 hours).

Since 1993, Dr. Vanderzwalmen has been a member of the team of the IVF Centers Prof. Zech. The IVF Centers Prof. Zech were the first to develop the cryopreservation medium (effective composition), the cryo-straws and the procedure enabling the biologists to carry out aseptic vitrification of unfertilized oocytes, embryos and biopsied embryos (PGD/PGS) (VitriSafe®).

With the introduction of the aseptic vitrification, where direct touch of the oocytes or embryos with liquid nitrogen is prevented, the number of births following an IVF treatment has greatly increased. If we look back some years, a patient had to undergo several oocyte pick ups to achieve one pregnancy. As a result of our accomplishments regarding single blastocyst transfer in combination with the very efficient aseptic vitrification technique, we are now able to achieve higher cumulative pregnancy rates. From one oocyte retrieval, a woman may conceive several babies after transfer of one vitrified blastocyst at a time.

Our motto means intimate love and happiness for couples who wish to have a child. For these couples, a child is living proof of the perfection of their relationship.

Stay informed
as a partner
in our network.

For personal questions we look forward to your message:

© 2022 Next Fertility IVF Prof. Zech • Member of Next Clinics. All rights reserved.